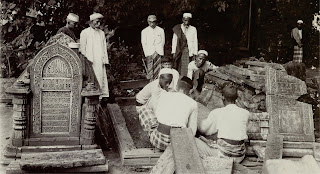 Maulana Malik Ibrahim Grave restoration in April 1912 led by Dr. DA Rinkes
The New Light on the coming of Islam to Indonesia book, compiled by G.W.J Drewes revealed that Maulana Malik Ibrahim was the first person to spread Islam in Java and was the senior guardian of other “wali”. While De Datum op ded Grafsteen van Malik Ibrahim te Grissee written by a French epigrafer, JP Moquette, mentioned, in the inscription of Maulana Malik Ibrahim, it was written that the deceased was named Al-Malik Ibrahim who died on Monday 12 Rabiulawal 822 Hijriah April 8, 1419), originally from Kashan (bi kashan), a place in Persia (Iran).

Shaykh Ibrahim Asmarakandi or Sheikh Ibrahim As-Samarkandi, his tomb is located in the village of Gisikharjo, Palang District, Tuban Regency.
Estimated to be born in Samarkand, Central Asia, in

the second half of the 14th century. Babad Tanah Jawi mentioned his name as Makdum Brahim Amara or Maulana Ibrahim Asmara, The pronunciation follows the Javanese tongue pronunciation in pronouncing As-Samarkandi, which later became Asmarakandi.
Sources of speech and writing equate him with Maulana Malik Ibrahim, but the grave sites are different so there is also a theory that states that they are two different people though both come from outside the archipelago.

n the manuscript of Nagarakertabhumi Sarga III and IV it is mentioned that Sheikh Hasanuddin is the son of Sheikh Yusuf Siddik from Champa who came to Java with a Chinese fleet led by the bigger commander of Waiping and Admiral Te Ho (Cheng Ho). Sheikh Hasanuddin descended and lived in Karawang.
In Karawang, Shaykh Hasanuddin married Karawang nobleman named Nyai Retna Perwati and it is estimated that in 1418 AD established pesantren in Tanjung Pura, or a year after the visit of fifth Chinese fleet led by Admiral Cheng Ho.
Due to the beauty of his voice, Shaykh Hasanuddin was later known as Shaykh Quro or Shaykh Kuro, who was interpreted as the Qur’anic reading expert.
This information is one that was presented at the History of Java Museum, a new museum at the center of Javanese culture in Yogyakarta. In addition, there are many other comprehensive information in the delivery, even this museum also completes it with Augmented Reality as information technology support.
This museum, located at JL Parangtritis KM 5.5 Bantul, is scheduled to open in October 2018. An opportunity for the younger generation to understand the history and culture of their nation by visiting the museum with this form of pyramid. A set of Sireh tools